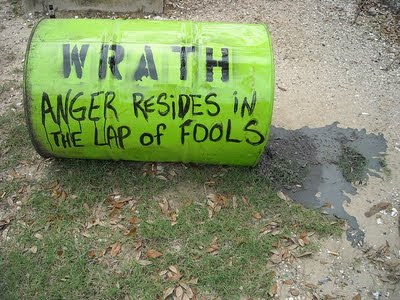 With despair and deceit

Under the weight of deception

When the room was entered

The greeting was a kiss

Under sandbags and rock

And all that was amiss

“Wrath is cruel and anger a torrent!”

Is what is said and done really meant?

“Who will stand before jealousy?”

When eyes are blind and there are none who see

Then, an open rebuke

Illuminating all that is concealed

“Faithful are the wounds of a friend!”

They reassemble and start to mend

Where this all begins

“A stone is heavy and sand is weighty, but a fool’s wrath is heavier than both of them. Wrath is cruel and anger a torrent, but who is able to stand before jealousy? Open rebuke is better than love carefully concealed. Faithful are the wounds of a friend, but the kisses of an enemy are deceitful.”