Write a Song About It 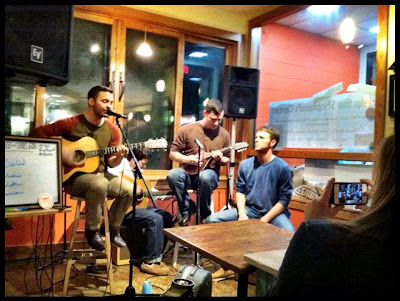 I stole this photo above from Ray over at Overland,
I hope he doesn’t mind. . .

In April of 2012 my wife and I took the Sr. Class of QCS on their Sr. Trip to an Island off the south coast of Haiti, Isle a’Vaches. It was a blast, other than possibly having contracted Malaria. On the trip there was a Kompa band that came and played for us one night. They were all drunk, but they got the job done. One of the elder men lead us in “dance” and he was out of control. I have dance in quotes there, because I had never seen anything like what I saw and haven’t seen anything like that sense. I wanted to write a song about it, but I’m not talented like that.

My friend Ray Bennett is talented musically see. He could have written a song about it, but I had to write this poem instead of a song. Everybody loves Raymond. I met Ray at Café Amouri in Vienna, VA at an Open Mic Night. Ray carries his own sign to Open Mic Night. I didn’t have a sign, so Ray let me borrow his sign. It was great. He’s such a nice guy. This poem goes out to Ray for National Poetry Month, and to that dancing Haitian guy. This poem is also a natural follow up to Poetry Songs about that Haitian dancing guy here.

Here’s to you and the guys over at Overland Ray!

Write a Song About It

Posted by Robbie Pruitt at 6:00 AM